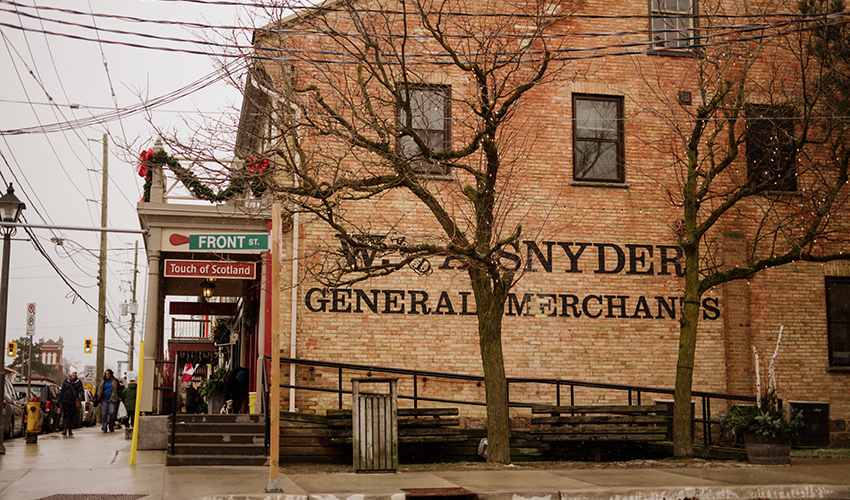 The Village of St. Jacobs is located in southwest Ontario, just north of Waterloo in Woolwich Township, Waterloo Region. It is a popular location for tourism, due to its quaint village appearance, retail focus and Mennonite heritage.

The two settlements near St. Jacobs were Conestoga and Winterbourne. The latter was settled primarily by English and Scots while St. Jacobs, like Conestoga, was primarily Germanic. This area on the Conestogo River was settled starting in 1830. Early arrivals included the Simon Cress family, Abraham Erb, and John B. Baumann (or Bauman). A significant influx did not happen until the early 1850s. Most of the settlers were Mennonites from Pennsylvania, so-called Pennsylvania Dutch. The word "Dutch" does not refer to the Netherlands but is a misnomer for Deitsch or Deutsch (German). They became known as "Old Order" Mennonites due to their conservative lifestyle. (Other Mennonites in the area have a less conservative lifestyle.) School lessons, even in 1860 were taught entirely in the local dialect of German.

Valentine Ratz built the first sawmill to the west of the village in 1844 and the first school, in a log house, was founded in the same year. Jacob C. Snider, of Swiss German descent, built a sawmill, a flour-mill and a woollen-mill by 1852, after having built a dam. These features helped to attract others to the small community. When the settlement became a village, it was named Jakobstettel (Jacob's Village) in honour of Snider. The St. was added to the name Jacob simply to make it sound more pleasing; the pluralization was in honour of the combined efforts of Jacob C. Snider (1791–1865) and his son, Jacob C. Snider, Jr. (1822–1857). The younger Jacob lost his life in the Desjardins Canal train disaster at age 35.

An 1851 report indicated that the village itself had a flour mill owned by Benjamin D. Snyder, a hotel, a blacksmith, a general store and a cooperage. The first post office opened in 1852, called St. Jacobs, with Joseph Eby as postmaster and the village was incorporated in that year. By 1855, the population was 400 and by then, there were four hotels, including Benjamins which still stands; it was later known as the Dominion Hotel. In 1871, E.W.B. Snider bought the flour mill and promoted hydro electricity and other milling operations. The river helped power mills and a woolen factory and a tannery; by then, the school had 66 students. There was only a single church, (Evangelical Association) built in 1850.

Industry in 1867 included a flour mill, a tannery, a harness shop, a wagon maker, a woollen mill, a barrelmaker. There was also a distillery, several general stores and two hotels as well as artisans and tradesmen. John Ortwein produced the burned limestone that was used in the construction of various buildings. In 1869, the population was 500.

A rail line was not built here until 1891. Even that did not help to boost the population and St. Jacobs remained a small village, with virtually no growth until the 1950s.

In the early 1900s, North Waterloo County - the Kitchener, Waterloo, St. Jacobs, Elmira area - exhibited a strong German culture and those of German origin (from Pennsylvania or direct from Europe) made up a third of the population in 1911. Lutherans were the primary religious group. There were nearly three times as many Lutherans as Mennonites by that time. The latter primarily resided in the rural areas and small communities.

The Home Hardware company, founded in 1963 and still operating, can trace its roots all the way back to the 1880s in St. Jacobs. That's when a tinsmith shop was opened and was later sold to Henry Gilles who added a blacksmith shop and hardware store that was managed by his son, Alfred Gilles. In 1933, Henry Sittler took over as manager of the hardware business and stayed on after the business was sold to Gordon Hollinger who added a wholesale division to the hardware store. In 1938, Walter J. Hachborn (who would found Home Hardware) began working for Hollinger while he was still a teenager; he was able to speak both English and the Low German of his Mennonite customers. Hachborn served in WWII where he worked as a warehouse foreman, learning new skills. After the War, he guided Sittler in buying military surplus goods.

In 1949, Hachborn and Sittler, with a silent partner, bought Hollinger Hardware. The business grew rapidly and new premises were bought, also in St. Jacobs. During a 1962 meeting, the two agreed that independent hardware store owners would benefit from an organization that would allow for lower wholesale prices due to buying in bulk. They met with 25 store owners and by March 1963, 122 dealers committed to the concept, paying to acquire the new corporation, Hollinger Hardware Limited. The company started business in September 1963, with Hachborn as general manager. Eventually, this would lead to the Canada-wide dealer-owned cooperative business with the Home Hardware head office and the massive distribution centre in St. Jacobs. In 2017, there were 1,100 such stores.